This is a series of very, very short items that have nothing to do with the current news agenda.  Swift diversions for a moment or two.
Apropos of Nothing #3 - 20 April 1908

On this day in 1908.  American explorer Frederick Cook was Robert Peary's compatriot and rival in the race to reach the North Pole.  Cook claimed to have reached it a year ahead of Peary, a triumph that was initially applauded by the geographical community.  But, without any hint of proof on Cook's part, such as navigational records, ultimately he was dismissed as a cheat.  Some supported Cook's claims. Others say both men were frauds.  Whatever the truth, both reputations were damaged forever.

"We were thin, with faces burned, withered, frozen and torn in fissures, with clothes ugly from overwear.  Yet men never felt more proud than we did, as we militantly strode off the last few steps to the world's very top."

Sources: My Attainment of the Pole;
The Traveller’s Handbook/Fergus Fleming/Atlantic Books/2012 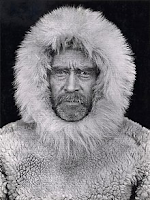