An article of any length based on the contents of this blog post is open for commissioning. Contact: joecushnan@aol.com

Michael Portillo, in his television train journeys shows, carries around his Bradshaw's Guide of railway timetables and travel notes, to compare modern trains and travels to days of yore.

It has struck me on more than one occasion that a series could be developed, based on Cathal O'Byrne's entertaining book As I Roved Out, to seek out places and stories of interest throughout Belfast's history. As I Roved out was first published in 1946 by the Irish News, and reprinted in 1982 by The Blackstaff Press. It's full title is As I Roved Out: A Book of the North - Being a Series of Historical Sketches of Ulster and Old Belfast. So, for the next few blog posts, I will dip into the book and highlight some of its content. I was born and raised in Belfast and O'Byrne's tales and recollections have always informed and entertained me.

I have lost count of the number of times I have walked the length and back of Royal Avenue, Belfast. The shops and other businesses have changed over the years but, taking the time to look up, there are still fine examples of original architecture. It has always been a busy thoroughfare, even stretching back to the days when it was called Hercules Street and nicknamed 'the street of (47) butchers'. 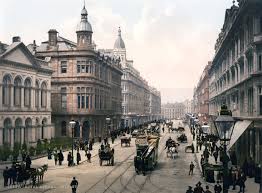 Cathal O'Byrne's somewhat rose-tinted, but enjoyably nostalgic, view of life in days gone by is encapsulated in this passage: 'What the people of Belfast of those early days seem to have had in common were music, and a light-hearted love of life and air and sunshine. They appreciated the simple joys, the blessings of life and health, opportunities for labour and, with a sturdy independence, and in their faith in the right, they feared no man.'

As a retail veteran, starting out in Belfast in the early 1970s, I have seen many changes in shops, shoppers and shopping, and not all for the better. Looking at the growing number of ailing High Streets and dying towns across the UK nowadays, it is impossible not to reflect on the sheer variety of trades operated years ago in main streets countrywide, similar to Hercules Street. Regarding High Streets generally, we've lost something valuable to the commercial monster, and sadly, in my opinion, we are past the point of rescue.

'Hercules Street was a busy and happy place in the old days,' wrote O'Byrne. 'The dwellers therein were good neighbours. They knew well the charity of friendliness and the peace of industrious contentment.'