STEPHEN BOYD - A PLAQUE & A LETTER FROM HIS WIFE 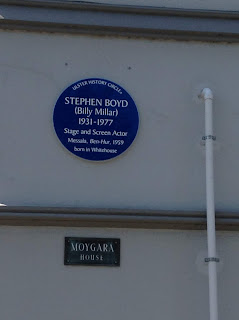 By pure coincidence, I landed at George Best City Airport, Belfast on Tuesday morning. As I headed towards the exit, my phone rang. It was a BBC contact asking if I knew about the Stephen Boyd commemorative plaque planned to be unveiled the next day. I said I wasn't aware of it. I was invited onto Radio Ulster's Talkback with presenter William Crawley, film expert Brian Henry Martin and Ulster History Circle's Maud Hamill to talk about the Ulster-born star of The Man Who Never Was, Ben Hur, The Fall of the Roman Empire and many more, a big movie star in the 1950s/1960s. It was a fun show to do but, sadly, I was unable to attend the unveiling. But, next best thing, my brother drove me out to the spot later on Wednesday afternoon. It is a splendid tribute to a largely forgotten man. The plaque will go some way to remind people that this wee lad from Glengormley/Whitehouse made it big in Hollywood.

I have had an interest in Stephen Boyd for many years because we both came from the same part of the world and I even attempted a biography a few years ago, allowing me to gather quite a lot of correspondence from his film associates.

But the most precious piece in my Stephen Boyd file is a letter from his wife, Elizabeth. I wrote to let her know that I was planning to write his life story. This was her reply:

“I do not feel any reason why you should not continue with your research for a proposed biography of my most beloved and talented husband Stephen Boyd.  I would, however, ask for your assurance that it will be done truthfully, in good taste and with the dignity he deserved.  I do not go along with the too often “dirty laundry sensationalism” literature that the bookshelves seem to be filled with these days.


We were two very private people, devoted to each other and lived our lives very quietly away from the Hollywood scene.  I am still devastated and unreconciled that he was taken so suddenly, and it is very difficult not to keep asking “Why?”  He was so very special, and had so much talent left to give this troubled world.”

Stephen Boyd died on 2 June, 1977, following a heart attack while playing golf at the Porter Valley Country Club in Northridge, California. He was 45. He is buried at Oakwood Memorial Park Cemetery in Chatsworth, California. His wife outlived him for another thirty years and they are now buried together, the devoted couple resting in peace.

We should remember him for his achievements and, in a crazy industry, for being, as producer Euan Lloyd called him, “one of the nicest, kindest people I have met in my lifetime, rare in this profession.”

Hats off to the Ulster History Circle! 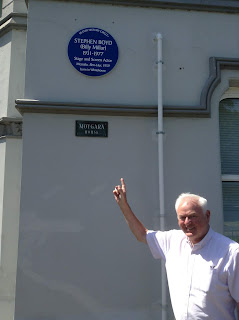