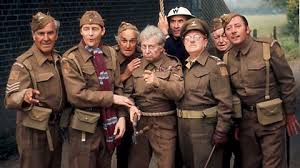 Television comedy is a funny old game, except that sometimes it isn’t. The most successful shows are the ones that leave you with memorable moments and no matter how many times you see or hear something, it is as fresh as the day you first saw and heard it. Terry and June was one of the most popular comedy shows starring Terry Scott and June Whitfield. In all of their sixty or so episodes, I cannot remember anything funny, no catchphrase, no stunt, nothing. It was a popular show, so it must have amused a sizeable audience. On The Buses was a clumsy, er, vehicle for Reg Varney and apart from Inspector Blake saying ‘I ‘ate you Butler’, it has not left a lasting impression. But, again, at over seventy episodes, TV bosses had faith in it. These are only two examples of forgettable shows but they are part of a long list of efforts now consigned to television comedy history’s dustbin.

But, thankfully, there is still much fondness around for moments that we relive or see again in repeats, that make us laugh, even though we know what’s coming. We mimic, we mouth and occasionally, if you are like me, we say the words out loud in tandem with the characters. Victor Meldrew’s seething ‘I don’t believe it’, still raises a laugh, as does Harold Steptoe’s ‘You dirty old man’. Further back, when Oliver Hardy berates Stan Laurel with a withering ‘Well, that’s another fine mess you’ve gotten me into’, it hits the funny bone every time. Tony Hancock saying ‘dear, oh dear, oh dear’ is just plain funny. Del Boy falling through the counter in a wine bar never fails and we wait for him to chastise Rodney with his greatest put down: ‘What a 42-carat plonker you really are.’ It is always a treat see see Morecambe and Wise annoying maestro Andre Previn. ‘I’m playing all the right notes but not necessarily in the right order.’ Basil Fawlty beating up his Mini is comedy gold. There are many more fine examples.

But, the all-time champion of television comedy, the one that occupies the highest pedestal, is the one that has given us gems like ‘we’re doomed’, ‘don’t panic’, stupid boy’, ‘do you think that’s wise, sir?’, ‘put that light out’ and ‘they don’t like it up ‘em’. It is the one where a German officer takes offence at a remark from a young British upstart. ‘Vot is your name?’ Quick as a flash the upstart’s captain responds: ‘Don’t tell him, Pike.’ Sheer brilliance.

Fifty years ago, at 8.20 pm on 31 July 1968, after an episode of the popular western series The Virginian, a pilot episode of a new situation comedy was shown on BBC1. It was an unusual set-up, not a cosy family farce of excitable children and exasperated parents as was much of the usual comedy output at the time, or a light rom-com about relationships. This was very different in that a bunch of characters combined to form a wartime Local Defence Volunteer (Home Guard) unit, nicknamed Dad’s Army, shakily drawn together to defend the coastal town of Walmington-on-Sea. The job of the ‘army’ was to be on the alert for a possible German invasion across the English Channel, a real threat at the time of Dunkirk. The comedy twist was that most of the individual characters were inept and had little idea of what actual war was really like.

Dad’s Army was created and written by Jimmy Perry and David Croft and was loosely based on Perry’s wartime experiences. The first script was sent to the BBC and after improvements and name changes, a series was commissioned. No one had ever seen a television comedy quite like it. The Man and the Hour introduced us to the motley crew comprising the pompous Captain George Mainwaring, the fey and wispy but not altogether daft Sergeant Arthur Wilson, the excitable, panicky Corporal Jack Jones, the dour and gloomy Private James Frazer, the wily, fast-talking spiv Private Joe Walker, the bumbling, weak-bladdered Private Charles Godfrey and the young, naïve Private Frank Pike.

Characterisation and script were vitally important but even more challenging was the selection of actors who could bring it all to life and laughs. I have included the actors’ ages at the time because it highlights that not all were actually that old at the beginning of Dad’s Army. But, over time, we grew to view most of them as old codgers, such was their performance talent.

Arthur Lowe, 53, a veteran of theatre and television, including nearly two-hundred episodes as Leonard Swindley, the boss of a clothing business in Coronation Street, landed the role of Mainwaring. No one knew at the time but we all know now that he and his co-stars were perfect casting. The equally experienced John Le Mesurier, 56, played Wilson. He had played dramatic as well as comedy roles and had made many guest appearances in television shows. Clive Dunn, 48, was Jones. During his Dad’s Army years, he had a number one chart single with Grandad. John Laurie, 71, was Frazer. In 1935, he had played a spooky crofter in The 39 Steps. James Beck, 39, was Walker. He had a CV of small screen bit parts. Arnold Ridley, 72, was Godfrey. He was also a playwright with around a dozen plays to his name. His most famous one, The Ghost Train, is still a regular favourite in UK theatres. Ian Lavender, 22, was Pike. He was a young actor cutting his teeth in small television roles. Later in life, he joined the cast of Eastenders.There was excellent support from Bill Pertwee as Chief Warden Hodges. It was unmissable television. It still is. Dad’s Army’s original eighty episodes ran from 1968 to 1977. All of the main players featured in every episode, except James Beck as Private Walker who died at 44 in 1973.

Dad’s Army, the feature film,arrived in 1971, and it held onto all the charm and buffoonery of the small screen version, all the characters we had now grown to love were on fine form. Mainwaring to Wilson: ‘Just a minute Wilson. I intend to mould those men out there into an aggressive fighting force and I'm not going to get very far if you keep inviting them to "step this way" in that nancy voice.’ Mainwaring to Hodges: ‘We’re the Local Defence Volunteers and I’m their appointed commander and I must ask you you keep your hands off my privates.’ Tee-hee. The script, the timing, the facial expressions, the ridiculous situations, all combined beautifully. Unlike the dire remake in 2016.

Someone should have twigged that it was a dreadful idea to take perfection and mess with it. The casting (and this is a man of the older generation speaking) was at best haphazard. The original actors are etched into my memory. So cinemagoers like me had to endure Toby Jones as Mainwaring, Bill Nighy playing Bill Nighy (for that is his forte) playing Sergeant Wilson, Michael Gambon just wrong as Godfrey, with Tom Courtenay as Jones and Bill Paterson as Frazer, both awkward and ill-cast. Catherine Zeta-Jones’s glamorous German spy and the storyline were okay up to a point but the biggest failing of all was the absence of the thing that made the original series so good – the Walmington-on-Sea Home Guard was hopeless and couldn’t defend a rice pudding. The comedy was in their collective ineptness. The introduction of a Mum’s Army in the remake was an unnecessary nod to modern times. The beach gun and grenade battle at the end was not in keeping with the show's original premise. In spite of the immensely talented cast, the film was a dud.

But, forget about that movie and rejoice that the BBC continues to show Dad’s Army from time to time. Fifty years on, the looks of contempt on Arthur Lowe’s face, the quirks of the other characters, the daft exploits, the sight of Jones’s chugging butcher’s van, his slipping of an extra sausage to a lady friend, the sound of Bud Flanagan’s opening song, all the aforementioned catchphrases, the marching troop during the end credits: ‘You have been watching…..’  it all adds up to television’s best comedy show bar none.

The exterior scenes for the show were shot in and around the market town of Thetford in Norfolk. A few years ago I visited the Dad’s Army Museum there. It is run by volunteers. Part of the museum’s charm is a reconstruction of Captain Mainwaring’s church hall office and I had a chance to sit there, don a military cap and pretend to be the old curmudgeon, not a great leap according to some of my family members.

In Thetford, as a great and deserving tribute, there is a wonderful statue of Arthur Lowe as Captain Mainwaring.

So, in the spirit of John Le Mesurier’s Wilson, I ask you if you would mind awfully stepping this way to salute the timeless, the wondrous, the hilarious Dad’s Army.
- July 30, 2018