HAPPY BIRTHDAY, DAME MARY PETERS - WHO ONCE COLLIDED WITH ME! 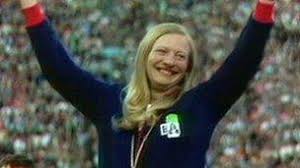 Once in a now defunct department store – Anderson & McAuley - in Belfast, I was down on my hunkers, as they say, browsing through some bric-a-brac on the bottom shelf of a display stand.  Gradually, the light around me began to fade and an enveloping darkness cast a giant shadow over and around me.  “An eclipse in a department store?” I pondered for a moment. “They’ll believe in leprechauns before they believe this.”

Slowly, I looked up from my crouching position only to see a formidable lady towering over me.  It was a David and Goliath moment only this Goliath was female and no less a sporting legend than Mary Peters, the Commonwealth and Olympic Games gold medal winner.

Oblivious to this innocent shopper, she inched her way along the aisle, looking at stuff on the higher shelves and eventually ploughed into me, knocking me over with all the power of, erm, an Olympic athlete.  She looked down at me and said: “Are you alright?”  I looked back at this goddess of the games and said: “I’m so sorry.”  She smiled and said: “Don’t worry.”  With that she walked on and I was left in a confused state, knocked over by Mary Peters and wondering why I apologised.

The incident happened in the late 1970s and I still applaud her sporting achievements but if it had happened nowadays, think of the claim I could have made.  I could have sued her for at least one of those medals. Talk about Belfast and furious!

Happy birthday to a true champion.