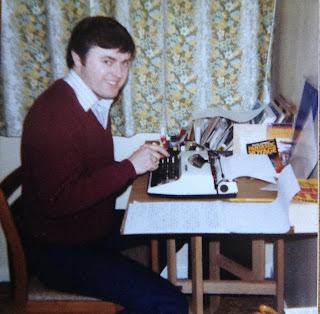 I am making an educated guess that this photograph was taken in the early 1980s, not because of my boyish good looks but because of where I was and what I was working on. The room is the smallest one in our first house as a married couple in Hemel Hempstead, Hertfordshire. The scattering of books and paper is research material for a manuscript that eventually became a biography of film star Stephen Boyd. But the significant curiosity in this modern era is that I am using a typewriter. I was not a trained typist and now that my healthy looking dark fringe has turned a tad whitish, I still only use one finger to type, two if up against a deadline and, on really adventurous days, a thumb as well. I remember all the palaver of changing messy black and red ink ribbons, struggling to align perfectly carbon paper in between two sheets of A4 paper, keys sticking when my typing became too frenzied and the slapstick joy of working with Snowpake correction fluid. My older sister Mary was the fully-trained and qualified typist in the family. I’ll come back to Mary later.

These were the days, children, before the information super highway and all of the things we take for granted nowadays like Google, online shopping, YouTube, Twitter, music streaming and all the other layers of world wide web wizardry that now obsess mankind for good or evil.

Five years ago on 20 November 2012, the manufacturer Brother claimed to have built the UK’s last typewriter in its North Wales factory. Since 1985, when the Wrexham operation opened, the site had produced nearly six million typewriters but demand in these islands had declined sharply, although there were still healthy markets for the machines in other parts of the world including the USA and the Far East, where Brother continued to manufacture typewriters.

As far back as the 16th Century, a number of inventors had a go at experimenting with ‘impressing letters onto a page’ using a machine and historical pictures show all manner of contraptions in their bids to come up with something that would benefit communications and printing. The first patent for “a machine for transcribing letters” was issued to Henry Mill, an English engineer, in 1714. The patent read, (in the days before spellchecking): “That he hath by his great study and paines and expence invented and brought to perfection an artificial machine or method for impressing or transcribing of letters, one after the other, as in writing, whereby all writing whatsoever be engrossed in paper or parchment so neat and exact as not to be distinguished from printing.”

The first claim for a practical typewriter as we would recognize it today came from four American inventors working together including Christopher Sholes who designed the familiar QWERTY keyboard layout. It was the first typewriter proven to be faster than handwriting. There is a plaque in Wisconsin to record that “at 318 State Street, C. Latham Sholes perfected the first practical typewriter in September 1869. Here he worked with Carlos Glidden, Samuel W. Soule and Matthias Schwalbach in the machine shop of C. F. Kleinsteuber. During the next six years, money for the further development of the typewriter was advanced by James Densmore who later gained the controlling interest and sold it to E. Remington and Sons of Ilion, New York.”

Remington further developed the typewriter idea with various models and in a matter of years, offices were getting used to the clatter of keys and margin-reached pings. In turn this led to a boom in secretaries and personal assistants, as well as multi-staffed typing pools, jobs mostly done by women. Eventually manual machines gave way to electric typewriters and many brands and versions emerged in the 1950s and beyond from manufacturers like Olivetti, Casio and Smith-Corona. Typewriters with electronic memory functions arrived in the late 1970s to be superseded in time, of course, by computers.

Whilst it may have been hard, tedious work typing business letters, reports and news stories all day, typewriters were seen as cool gadgets for writers and you don’t have to look too hard to find nostalgic photographs of Ernest Hemingway, Agatha Christie, Ian Fleming, Anthony Burgess and many others posing, some with a cigarette or a pipe (not Agatha), next to their machines. For a jolly burst of nostalgia, it is worth heading to YouTube to listen to The Typewriter tune composed by Leroy Anderson and first performed in 1950 by the Boston Pops Orchestra. It is a brilliant piece of music making the most of keys, bell and carriage return.

Rather like vinyl LPs, the typewriter may not be extinct just yet. I am sure there are many people still using them and revering them as trusty old companions. Of course, even in this age of technological overload, computers are not universally loved. The actor Tom Hanks has stimulated interest by writing a book of short stories, each one featuring a typewriter and, it is reported that he is a collector with around two-hundred typewriters in his loft. On Desert Island Discs, he chose as his luxury a Hermes 3000 manual typewriter and paper.

Some nuggets from the typewriting archives - the writer Cormac McCarthy (No Country For Old Men, etc) bought a Lettera 32 Olivetti in 1963 for $50. It was sold at auction a few years ago for $254,500. Mark Twain, it is said, reckoned Tom Sawyer was the first novel ever written using a typewriter. J. K. Rowling said: “I had an old typewriter and a big idea. And so rock bottom became a solid foundation on which I rebuilt my life.” As mentioned earlier, the last typewriter made by Brother in Wrexham was donated to the Science Museum in London because it represented the end of a technology that had been important to so many lives.

My sister Mary tells me that she learned to use a typewriter at Lisburn Technical College around 1968. She used an Olivetti manual machine and the teaching itself was interesting. A wooden box was positioned so that the student could not look down at the keyboard. It was not only a skill to get all the fingers choreographed, it was a memory test. Each student had to memorise the position of every letter, number, symbol and function of the keyboard. Mary’s typing speed achieved 80 words a minute and she remembers loving the sounds of hitting the keys and the growl of the carriage return.

Mary’s skills led her to a great career, starting at 17 years old in Belfast with Solomon and Peres, the music, entertainment retailer/distributor for Decca, RCA, Brunswick and Coral Records in Ann Street and then to Cyril Lord’s, the carpet people in Bangor before moving on to several Northern Ireland civil service jobs doing secretarial work, shorthand and typing. She describes leaving a typing pool, in which she punched away at manual typewriters, as “escaping that enclosure”.

We are so sophisticated now with our finger and thumb gadgets that most of this modern generation of texting and phone-checking obsessives is oblivious to a good old-fashioned typewriter. But in the history of QWERTY from its outset, there are people of past generations, mostly female, who could recall their days, for good or otherwise, on automatic pilot tapping away at the behest of their bosses, mostly male, in industry, politics and media. Without typewriters and typists in the past, the whole commercial world might have ground to a halt and the brown fox and the lazy dog might have been redundant. Time moves on, as do methods for typing, but there is still, and hopefully, always something that reminds us of where it all began. My sister Mary reminds me of many great things but I am in awe of her mastery of the keyboard.