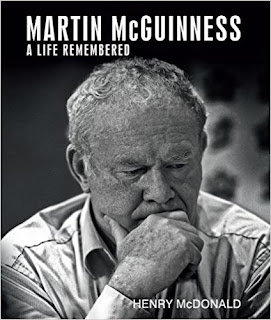 ‘Any consideration of McGuinness’s life and legacy is complicated and difficult. For some he was a ‘freedom fighter’, a hero who stood up for civil liberties of the Catholic and nationalist communities; for others he was a terrorist, an IRA commander who orchestrated death and violence on a mass scale’.

Within the 120 or so photographs in the book, there are plenty of reminders of the terrible loss of life, the injuries, the destruction, as well as the everlasting burdens of emotional turmoil that victims of the ‘Troubles’ have had to endure. Pictures of police brutality, riots, confrontations and coffins are stark reminders of very dark days. The 1972 photograph of McGuinness pointing a pistol, rather like a still from the TV show The Professionals, is one, it is to be imagined, he wished later in life had not been taken.

And then, slowly but surely, on a very rocky political road, McGuinness, along with close friend Gerry Adams and others, began to orchestrate a Republican-led campaign for a cessation of violence and a peaceful future for Northern Ireland. They had a job on their hands to convince factions within their own movement but through a series of negotiations and appeals to the grass roots, they gained support. This was and still is a land of disagreements and suspicions but gradually in collaboration with political opponents, the governments in Westminster and Dublin, and the active encouragement of the United States administration, a lengthy process eventually resulted in the Good Friday Agreement in 1998. A photograph of the Belfast Telegraph front page at the time said: ‘After 3,168 deaths and 25 years of terror, the IRA says… IT’S OVER’. Juxtaposed to that picture in the book is an image of a young boy playing handball against a wall on which someone had painted: ‘Time for Peace’.

The Agreement was signed off in April 1998 and Northern Ireland breathed a short-lived sigh of relief. In August of the same year, the peace was shattered by a huge car bomb in Omagh, an explosion that killed twenty-nine men, women and children and injured more than two hundred people. The two-page photograph of the aftermath is chilling. McGuinness, by this time transforming from ‘firebrand revolutionary to peacemaker’ denounced the attack calling it ‘indefensible’. He was reinventing himself.

Moving on to the once unthinkable, as illustrated in several photographs, Martin McGuinness became Deputy First Minister working alongside Ian Paisley as First Minister in 2007. The famous Chuckle Brothers shot of Paisley laughing heartily and McGuinness beaming widely is an amazing moment involving two once-sworn opponents with not an inch of compromise between them. Other photographs underline a changing persona including poses with President Clinton and another unimaginable moment, shaking hands with the Queen.

In January 2017, Martin McGuinness resigned as Deputy First Minister. Clearly, at the time, he was ill and the photograph of him being driven away is a haunting image. He died on 21 March 2017. The family of Ian Paisley (who had died in 2014) sent warm messages with Ian Paisley Jr. noting that his father and McGuinness had been on ‘a remarkable journey that not only saved lives but made the lives of countless people better’.

Tony Blair said: ‘I will remember him with immense gratitude for the part he played in the peace process, and with genuine affection for the man I came to know and admire for his contribution to peace’. Blair’s spin doctor, Alistair Campbell described McGuinness as ‘tough-minded, abrupt, likeable, human’.

Bill Clinton urged: ‘If you want to continue his legacy, go and finish the work he has started’. And the photograph of Clinton with his hand on the tricolour-draped coffin underlines the former President’s admiration for Martin McGuinness.

In conclusion, I draw your attention to my first paragraph. But I will add this. Henry McDonald has produced an excellent book that documents a significant figure in Irish history. It is not a conventional biography, it is not judgemental and it is all the better for it. It deals with the facts and in a lot of instances he allows the photographs to do the talking. It is an easy option to skim a book of photographs but many herein will demand that you pause, consider, reflect and remember depending on your personal appraisal of Martin McGuinness.