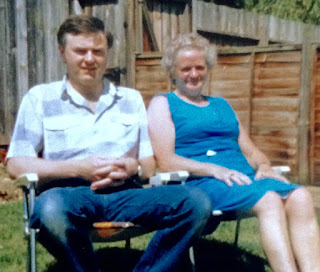 Recently in London, I attended the wonderful wedding of one of my two sons, David, and his lovely wife Stevi-Ann. It was a great day, emotional, full of joy and laughter, helped not insignificantly by a lively Belfast family contingent, full of beans and up for a good time. Inevitably in the course of such a celebration, we remember absent friends and, of course, family, and it got me thinking of my mother because we are close to an anniversary. I’m thinking now of 70 years ago. 1947 was a key year in her history.

Every year can claim its own identity with specific events, political ballyhoo, war versus peace, celebrity births and deaths and the odd scandal here and there. There’s always something to remember, or someone, sometimes fond nostalgia, other times moments of sadness and regret. And round numbers are often the triggers in recalling those moments from the past.

First, here’s some wider background to that time in and around Belfast, my home city. In the early months of the year, there was a bout of severe weather, some called it the ‘big snow’.  It was brutally cold with high temperatures reported between one and three degrees and lows of minus seven. It was followed later on by a hot summer, the sixth hottest since records began according to the seaweed annals. Harland and Wolff launched HMS Centaur and the Enterprise train service commenced between Belfast and Dublin. Belfast Celtic won the Irish League and Cavan defeated Antrim to win the Ulster Senior Football Championship. Singers Clodagh Rodgers and Paul Brady were born as were activist-politician Bernadette Devlin and future Ulster Unionist leader, Reg Empey. Basil Brooke was Prime Minister, four years into a twenty-year term.

It was two years after the end of the Second World War and nations were in recovery. Across the United Kingdom, there was a climate of austerity and ration books limited the purchases of meat, butter, sugar, lard, cheese and sweets. Bread supplies were strictly controlled too. Larders might have been stocked with long-life tinned vegetables and fruit and the main ‘gadgets’ in many homes were restricted to a sewing machine, a mangle and, if slightly better off than average, a vacuum cleaner, although linoleum and bare floors were more common than carpets. Some council houses and flats had paraffin heaters as an extra boost to heating but the main source of warmth for a house was a coal fire, supplemented by whatever heat drifted from kitchens.

The average annual salary was a tad short of £300, the price of an average house was under £2,000 and a modest car cost £600 running on fuel at just 2 bob a gallon. A loaf of bread was 2 pence, a packet of sugar 3, a pint of milk 8 and small blocks of butter and cheese weighed in at 4 pence each. Five pounds of potatoes would have set you back 3 pence and you could buy a quarter pound of bacon for half a crown. A pint of beer was priced at just over a shilling and in the sweetie shop, a penny chew actually cost a penny.

At the pictures the choice included Esther Williams in Fiesta, Cornel Wilde in Forever Amber, Betty Grable in Mother Wore Tights, Bing Crosby in Welcome Stranger and Hope, Crosby and Lamour playing it for laughs in Road to Rio. The popular music of the day included hitmakers the Andrews Sisters, Frankie Laine, Perry Como, Dick Haymes, Dinah Shore and the Mills Brothers. Indeed, every year has its own news and historical shape. And the reason it is an important year in my family’s history is that it was the year John Cushnan married Rita Millar, my father and mother.

Honing in on that specific day, Tuesday 16 September 1947, the weather in Belfast included moderate to fresh winds between west and south, fair periods and scattered showers, some heavy. It was rather cool according to one local newspaper. Seventy years on and much has happened in our family. I have written quite a bit about my father’s decision to abandon us in 1960 but I wanted here to concentrate on the kind of woman my mother was and the influence she had on me.

She was born Margaret Mary Millar in October 1925, but was known throughout her life as Rita. Her parents, Rachel and Tommy lived on the New Lodge Road and number 46 was where my mother, her brother and sister grew up. Tommy has an interesting story, one for another day. Briefly, he was Protestant and Granny Rachel was Catholic. Tommy made the decision to change religion so that he could marry the girl he loved. Some hallions on his side of the religious divide, including his own brothers, weren’t too chuffed about this move and ordered a hit. For whatever reason, the threat faded after a while and my grandparents had a very settled fifty-year marriage.

My mother and father were 22-years old when they married. They grew up a few streets from each other, my father in Annadale Street and my mother on the New Lodge Road. It is not clear where or when they first met but I know my mother was a frequent cinema-goer to the Capital, the Lyceum and the Duncairn, all within walking distance of home. My father probably went to the same neighbourhood cinemas. She loved dances, especially ceilidhs. From my Aunt Sheila’s memory (my mother’s sister) it is likely they met in a dance hall, probably at the Ard Scoil on the Falls Road, and the courting began.

At nine-o’clock on 16 September 1947, their wedding took place in St Patrick’s Church in Donegall Street. The best man was my father’s mate Gerry Savage who later in life emigrated with his family to Canada. My mother’s sister Sheila and cousin Marie were in attendance. After the service, there was a wedding breakfast and the honeymoon was one night in Dublin.

Before they married, both of my parents were in textile jobs, he working as a tailor’s cloth cutter and she sewing and stitching in several factories, jobs they continued doing until the children came along. There were seven of us born between 1949 and 1958 and, as I write this, six of us have survived. The eldest, Paul, was killed in a road accident in 1974. It devastated his wife and three young children as well as my mother and the rest of us. The accident happened on 6 December, so that was one tough Christmas for all concerned.

After thirteen years, my father walked out and left my mother with a huge responsibility, on reflection an impossible task to raise seven young children, age range eleven to two, on very little money. I still cannot fully fathom how she did it but somehow she managed through a combination of love, faith and not much choice. She had to carry on. In that era, she was the consummate housewife and mother. She could cook delicious stews, soups and pork fillet, roast chicken and beef dinners. She baked amazing apple and rhubarb tarts and currant (curn) squares, all of which were demolished by hungry kids, sometimes within half an hour from a hot oven. She stitched and repaired our ripped clothes, and knitted in what seemed like every spare moment, Aran jumpers a speciality. I think at one time all of us had jumpers that made us look like The Clancy Brothers and Sisters. On one occasion, as a special request, her knitting needles sprang into action and she produced an exact replica of Monkee Mike Nesmith’s green bobble hat. I wore it with pride, even outside in the street! She would get up early on school mornings to rouse us and get us ready with a good breakfast. We hadn’t a clue but we were spoiled with her kindness. I cannot recall a single Christmas or birthday without presents or great food. As I said, I don’t know how she did it. 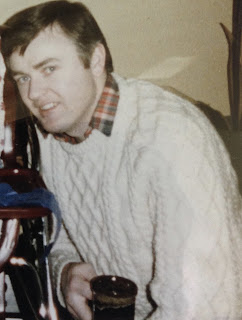 Me, as a Clancy Brother!

She was a loving, caring mother, keeping much of her worry and pressure to herself and not burdening her children with open reflections of the marriage breakdown. She was supportive of my interests, hobbies and ambitions, no matter how daft they may have seemed. She was patient and with seven kids, that is a triumph in itself. She was generous with whatever little money she had. We had next to nothing at times but we always seemed to have treats. She was friendly, approachable and helpful to her neighbours and friends. She was a devout Catholic, relying on her faith and prayers to shed light on some dark days. She congratulated and celebrated exam results with encouraging words and hugs. In short, she was always there for us and in her list of priorities, we came first, even before her own needs.

My father died at 57 in 1982. My mother outlived him by nearly thirty years. She suffered from senile dementia, cared for full-time to the end by my three wonderful sisters, Mary, Geraldine and Sheila, and their very supportive husbands. The last time I saw her was in the City Hospital. I’d come over from England and went straight to visit from the airport. When I entered the room, I kissed her forehead and held her hand. As I stepped back, I could see a puzzled look on her face. She pointed at me and said: “I know your mother.” I wasn’t upset because, you know, she was absolutely right. She passed away at 86 on 29 December, 2011.

A 70th wedding anniversary is designated platinum, precious. Now there’s a word to finish off thinking about my mother’s memory, all she endured and what she achieved since that wedding day in 1947. Precious.