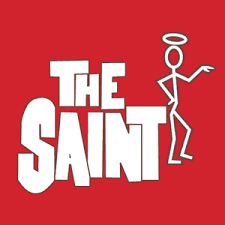 Leslie Charteris was born in Singapore on 12 May, 1907 to a Chinese father and an English mother.  He was educated in Fleetwood, Lancashire and King’s College, Cambridge.  After leaving university, he travelled and pleased himself with a variety of jobs including barman, pearl diver and bus driver.  At the same time he was writing thriller and adventure stories.

He is best-remembered for creating The Saint/Simon Templar, a character that took him a couple of books to be satisfied with.  For a while he worked as a writer for Paramount Pictures.

First, The Saint became a radio series, (1944-51) starring Vincent Price.  On the big screen, Simon Templar was played by Louis Hayward, George Sanders and Hugh Sinclair in films (1938-43), and much later by Val Kilmer (1997), a version, in my opinion, that was a complete mess.  Charteris did not live to see the Kilmer Saint.  I suspect he would have been horrified.

On television, from 1962 to 1969, Templar was played by Roger Moore in 118 episodes and to a certain generation, there is no other Saint.  Before the opening credits, a halo above Moore’s head, his raised eyebrow and a cracker of a theme tune combined to amuse and thrill the audience.  Of the 118, 71 were in black and white, 47 in colour.

In 1978/79, Return of the Saint starring Ian Ogilvy ran for 24 episodes.  In 1989, a series of television films starring Simon Dutton appeared.

Leslie Charteris died at 85 on 15 April, 1993.  He created one of the most famous characters in popular fiction and enjoyed much success in books, films and television.

Even now, rumours exist that The Saint could re-emerge on screen in yet another recreation.  And why not, as long as it is done well? 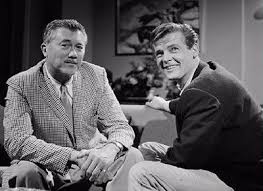 Sources: Wikipedia and others