BOOK REVIEW - A FORCE LIKE NO OTHER: THE NEXT SHIFT 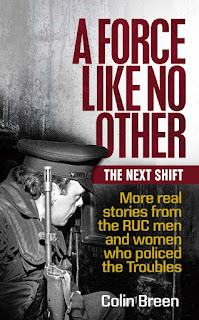 A Force Like No Other: The Next Shift
More real stories from the RUC men and women who policed the Troubles
by
Colin Breen

In this follow-up to his bestselling A Force Like No Other, Colin Breen brings together more compelling insider stories from RUC officers who served during the Troubles. Includes stories about the IRA border campaign (1958–62), the Shankill Butchers murders and the 1987 Remembrance Day bombing in Enniskillen.

Here's a short extract from a chapter:

The words of a Royal Ulster Constabulary police officer illustrate the constant on-duty/off-duty pressure of doing such a job. At any moment of any day, a life could be ended by a tripwire, a rigged gate or door, a sniper, a mortar shell, a brazen assassin or a bomb. As an RUC officer, you, your family, friends and colleagues were all targets.

In this excellent book, Colin Breen reminds readers that from 1969 to 2001, 302 police officers were killed, over 10,000 were injured and hundreds were left disabled. The stories and memories at times make harrowing reading and I lost track of how many officers were "blown to bits" or "to smithereens". Some of the recollections are graphic and red-raw, which they should be, otherwise the book would be just a series of anecdotes. This was real life and there were no guarantees that a police officer would go to work and come back home at the end of a shift. As well as putting on the uniform and all the necessary gear, an officer would also have to 'wear' caution and alertness and be ready for anything. One mistake or forgotten detail in a procedure could be fatal.

I was struck by comments that there was little or no counselling at the height of the Troubles for police officers who had experienced traumatic incidents. A nice chat, maybe a day off or a few shots of whiskey replaced any notion of serious therapy. It beggars belief. Years after they left the force, many officers still have nightmares and suffer stress.

There is not as much humour in this follow-up book but there are many examples of the same camaraderie among officers, colleagues looking out for each other and sometimes running or driving towards danger to help anyone in distress. There are stories ranging in an arc from courage to despair.

Colin Breen writes: "This book shows the human face behind the uniform and how ordinary people coped in extraordinary times."

And it is the human element that makes this a powerful book, one that will not appeal to everyone, especially those who have no fondness for the police, but it a hard book to ignore as it is a candid reflection of some very bloody times in recent Northern Irish history, as told by real people.