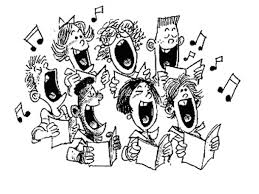 In the mid-1960s, I was a first year pupil at St Mary's Christian Brothers Grammar School, Belfast. Just about every kid was Shanghaied into participating in music lessons run by Tommy Cooney - obviously Mister Cooney to us - and one of his major tasks was to assemble a decent set of singers to celebrate some anniversary or other to remember the life of Edmund Ignatius Rice, the founder of the Christian Brothers movement in 1802.

Mister Cooney was a plinkety-plonk piano player, somewhere between Mrs Mills and Animal from The Muppets, but he was enthusiastic and tried very hard to keep us from getting bored with the necessary repetition of scales and all the other layers of music theory. He did tell us that he expected us to jump out of bed in the mornings, open the window wide, take as deep a breath as we could muster without busting a rib and then sing the highest possible note we could manage. This, he said, was good for the lungs. Now, if anyone ever followed his advice I have yet to hear about it. Letting out a high-pitched squeal early in the morning where I lived would not only have scared the birds and the milkman, it would have been a signal for some annoyed neighbour to hurl a brick through the aforementioned window.

As the weeks went by and we moved closer to the big Ignatius Rice event, several kids were dropped from the choir. Sadly, I made the cut. Rehearsals continued at a pace. It was mostly torture but there was no escape. Light relief came from watching Mister Cooney demonstrate the techniques of singing. Whenever there was a Pavarotti vocal stretch required, he would go for it but, almost always, his false teeth would dislodge and he would chew and gurn them back into position before trying again. Picture a couple of dozen squirming kids simultaneously trying to stifle titters.

As far as I can remember, the event went well and not long after that I left the choir. My work was done.

One other thing I recall about Tommy Cooney, the music teacher - he could't sing a note!
- September 12, 2019