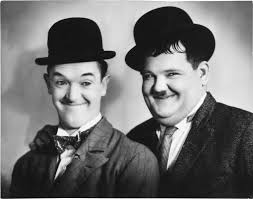 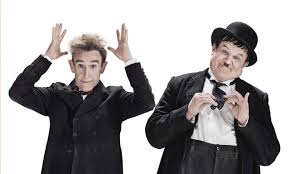 I watch a lot of films. Most of them, entertaining as they are, are instantly forgettable, especially the wham-bam-boom action movies that I love. But, every now and again, a film arrives and is so powerful in terms of production or performances, or both, that it stays with me for a long, long time.

Off the top of my head, I am very fond of Casablanca, The Searchers, The Quiet Man, All The President's Men, Die Hard, True Grit and many more.

But I went to the cinema yesterday to watch Stan & Ollie, the story of Laurel and Hardy on their UK and Ireland theatre tour in the 1950s. This period was way past their peak as film comedy geniuses, but they still had the gifts and talents for glorious entertainment and, after a shaky start to the tour with patchy audience numbers, they began to attract attention through all kinds of promotional work and, as a result, theatres filled up with appreciative crowds.

They worked their way through the stresses and strains of touring, falling out and falling back in with each other. I laughed, I smiled and I shed the odd tear. It is that kind of film. Funny and emotional.

When I first read that a biopic of Stan and Ollie was on the cards, to star Steve Coogan and John C. Reilly, my heart sank. Really? I anticipated disaster and an insult. Laurel and Hardy stand on the highest of high pedestals and woe betide anyone who messes with their legendary status.

But, I am relieved and more that happy to report that the film is wonderful. It is shot beautifully, the attention to detail is perfect, the script merges some of the funniest routines ever seen replicated superbly by Coogan and Reilly and we get a real sense of the tension and love inherent in a long-established show business partnership.

Steve Coogan is magnificent as Stan Laurel and John C. Reilly is equally so as Oliver Hardy. They do not over-impersonate. (I wonder if they were tempted to over-egg it.) They are pitch perfect. It is only January, but it could well be my film of the year.

And, referring to the first lines of this post, I am writing this the day after seeing the film and I know it will stay with me for a long time, possibly forever. I will watch it again, maybe several times.

I love movie trivia and often refer to the IMDB site. I was interested in the locations used in the film.