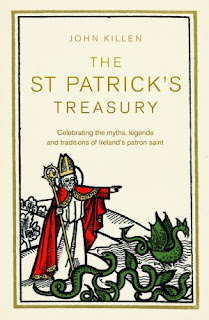 If I was suddenly confronted with the question: Tell me everything you know about St Patrick, I reckon I would stutter and stammer, hum and haw stuff like patron saint of Ireland, something about Downpatrick and Armagh, a French connection, something about Wales, a nod towards Glasgow, snake expeller and a sort of emblem for an annual booze-up on 17 March every year when shamrock, green suits and hats and black stout define Oirishness. In other words, I could not stretch my thin knowledge to more than three sentences. Shameful, for a Belfast boy.

But now, there is no excuse, thanks to John Killen who has compiled The St Patrick’s Treasury, celebrating the myths, legends and traditions of Ireland’s patron saint. This is a brilliant and comprehensive collection that is both informative and entertaining. It covers St Patrick’s life, his writings, his travels and all manner of things that make him three-dimensional compared to my miserable two-dimensional thin sketch.

‘He was the son of a Roman official, Calpurnius, living probably in Wales. As a boy, Patrick was captured by raiders and sold to an Irish chieftain, Milchu. He spent years in slavery, herding sheep on Slemish Mountain in County Antrim.’ But he escaped, boarded a ship and headed for France. In a dream, ‘he heard voices calling him back to Ireland’and back he came on a mission to get rid of paganism and convert the Irish to the Christian faith ‘until Judgement Day’. His years and journeys are recorded in fine detail, even though the story contains things that might have happened, perhaps happened and probably happened, such is the vagueness of his life. In one section of the book there is ‘A Possible Chronology for Saint Patrick’ but, and this is the fascinating thing, it doesn’t matter about the details because John Killen maintains our interest throughout. We have a sort of a timeline and that will do.

Patrick’s writings are explored in The Confessions and Epistle to Coroticus, both humble yet forceful and encouraging essays/sermons setting out his beliefs, failings and unbending faith. His geography and journeys are explored in Places of Pilgrimage; several County Down locations, Leinster, Munster, Lough Derg, amongst others, and ‘across the water’ in Auxerre, Tours and Rome to name three. His last resting place was Dundalethglass (Downpatrick).

Americans go nuts for Patrick from Boston to New York to Philadelphia to Baltimore to Charleston to Savannah to Washington. At least one day in the year, much of the world smiles through Irish eyes. Not only is St Patrick a saint, he is also a brand, no matter how much of a shiver that provokes.

A look at Relics and Representations of items linked to St Patrick (check out the jawbone story) and an analysis of the man, the myth, the legend concludes a mesmerising book that is written superbly, blending facts and assumptions on this fascinating man of mystery. Hail, glorious Saint Patrick!

The St Patrick’s Treasury is beautifully produced and illustrated and I and many others will have no excuse whatsoever for stuttering and stammering when asked about St Patrick. I know a lot more now and if ever I get stuck in conversation, I’ll just reach for my ‘John Killen’, a masterwork, to be sure, to be sure.
- October 22, 2018