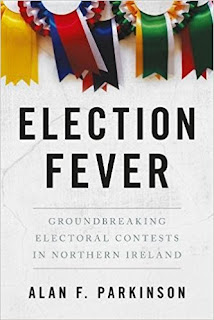 “….. most people’s electoral decisions are still framed in terms of their religious membership and sense of ethnic identity. Northern Ireland remains, politically at least, a place apart, where elections represent periodic opportunities to manifest tribal loyalties shaped by history and tradition, rather than the expression of pragmatic voter choices relating to the modern world.”

One of life’s annoying things is when you are doing a jigsaw puzzle and everything is progressing reasonably well, the frames straight edges coming along, pieces fitting together nicely, a picture slowly developing and then you turn your back for a minute and someone upends the whole lot and you have to start all over again. The unfinished jigsaw has been reduced to a pile of fragments and you wonder why you bothered with the wretched thing in the first place. Northern Ireland politics is a bit like that, nay, a lot like that. In history there have been periods of progress, then somebody decides to change something or says something controversial or makes unhelpful demands and that upendedness catches hold in a dug-in-heels, wait-a-wee-minute, catch-yourself-on circus of finger-pointing, insults and irritating stubbornness. It is important to try to understand why this all too frequent shambles of a political atmosphere has affected and continues to affect Northern Ireland.

Alan F. Parkinson rides to the rescue here with a brilliant analysis of some of Ulster’s elections over the years, from 1905 to the present day more or less. It is indicative of the complexities of Northern Ireland’s take on politics and politicians that the introduction to this book is over forty pages long. But that’s the way of things. There is a handy reminder that the history of the country is festooned with the three and four letter abbreviations of parties and organisations all sticking their oar in during the past 100 years, for good or ill. The recipe is always changing and the pot is forever stirred!

Parkinson reminds us that the Westminster elite really hadn’t much of a clue as to what to do about Northern Ireland, and that is still pretty much the case today. Violence, the super-egos of mouthy local politicians and out-of-their-depth dabblers across the water have all played their part in keeping communities divided but thank goodness there have been some courageous politicians who have stepped up and risen above the noise and mischief of opportunists. The most recent example of hope on a journey of ceasefires and negotiations was the peace process that led to the Good Friday Agreement in 1998. It was a remarkable achievement by Northern Ireland political standards and brought relief to its citizens while it lasted.

The aforementioned dug-in-heels, wait-a-wee-minute, catch-yourself-on circus of finger-pointing, insults and irritating stubbornness have never gone away. And neither has violence ceased completely. The quotation in italics at the beginning of this review is a perfect summary of not only where Northern Ireland’s politics and electorate have been but also where they are now and where they may well be forever.

The book is not only a political study. It illustrates the differences of opinion and interpretation of local media, particularly comparing the language used and stances taken by the Unionist-leaning Belfast Telegraph and the nationalist-leaning Irish News. It is fascinating to read two very different views of the same event. But this versus that is part of the tapestry and there is nothing wrong with healthy and intelligent debate.

Alan F. Parkinson has produced a painstakingly detailed account of key points in Northern Ireland’s political history. He has guided us through many layers of party decisions and their consequences, given us useful appraisals and portraits of key players in this ongoing saga, highlighted the nature and content of election campaigns and performed an essential service by explaining the nature of one of the most politically complicated and frustrating countries in the world.

This is a superb study and should be read widely, not least by the voters of Northern Ireland who have a glorious opportunity to lay a foundation for future generations, a future that does not rely on hauling huge amounts of negative baggage from the past.

Hope should never be dismissed and maybe one day the jigsaw puzzle will cease to be a puzzle.