BOOK - BUT ENOUGH ABOUT ME BY BURT REYNOLDS & JON WINOKUR 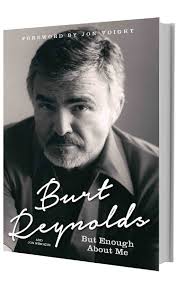 In the late 1970s, Burt Reynolds was the biggest cinema box office star in the world. For a few years, he could do no wrong. He was well-known as a TV star in series like Riverboat, Gunsmoke, Dan August and guest roles in a host of television shows during the 1960s and into the 1970s. His most important big screen role came in 1972 when he starred with Jon Voight, Ned Beatty and Ronny Cox in John Boorman's tense drama Deliverance. It is a powerful film containing powerful performances and a story that lingers, not least because of the male rape scene.

People saw Reynolds in a new light. He caught Hollywood's attention and moved on to star in a mixed bunch of features, thrillers and comedies including Shamus, The Longest Yard, W. W. and the Dixie Dancekings and Silent Movie. He struck gold in 1977 with Smokey and the Bandit about illegal transportation of booze across state lines. It was a massive hit and started a great run for Reynolds. He was at the top of his game, athletic, handsome, tough and funny. He is pretty open about how he got swept along by fame and success, both fuelling his ego, and how it all came crashing down. "The chart of my career is like a heart attack."

Along the way, he had his struggles with studios and his encounters with many women, including the two loves of his life, Dinah Shore and Sally Field, although neither relationship lasted as long as he would have wanted.

In 1984, when making City Heat with Clint Eastwood, he was injured badly during a fight scene and a chair broke his jaw. This started an agonising period during which Reynold's health and weight and looks deteriorated, causing a lot of gossip that he had contracted AIDS. It wasn't true but the experience saw him fall out of favour with many of his Hollywood connections and, in the book, it's not hard to detect his distaste for so-called friends who abandoned him.

The book is very entertaining and feels honest. Burt Reynolds is 81 now and he does not have any reason not to tell it like it was and is. It is an easy read and star names are scattered liberally. There are great anecdotes and, no doubt, exaggerations. He talks with great pride of his work as an acting teacher for many years and probably gets more, or at least equal, satisfaction from that than making movies. On balance, the book is a fun ride.

Especially fascinating is the list of films that Reynolds says he missed out on, either the star roles or participation in, including:

Batman (TV)
Rosemary's Baby
Brian's Song
The Godfather
Blume In Love
A Touch of Class
Die Hard
Pretty Woman
One Flew Over The Cuckoo's Nest
Terms of Endearment
M*A*S*H
Taxi Driver
Star Wars (Han Solo)
and, he claims that Cubby Broccoli offered him James Bond when Sean Connery was trying to negotiate more money. I'm not sure how much of that to believe but it's in the book, so I'll leave it there.

"I've done more that a hundred movies. I'm proud of maybe five of them."

Burt Reynolds has been a small and big screen star for 60 years. His career is a mixed bag, as most film careers are. But, when he was at his entertaining best, he deserved being king of the box office.

"As I look back, I'm proud of my accomplishments and disappointed by my failures....... (but) nobody had more fun than I did."