Film star Stephen Boyd would have been 85 on 4th July.  Here's a little memory from six years ago, when I was contributing to a TV documentary on his life and work.  On 3 July 2010, I met James Ellis for the first time. 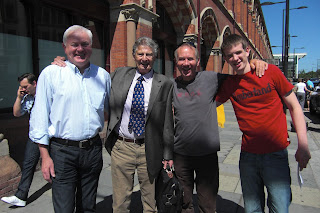 Sometime in 2007 or 2008, I had a notion to really do something positive with all the valuable biographical material I had accumulated on Stephen Boyd.  I sent out a brief pitching note to various film, TV and radio production companies and heard nothing back, apart from one notable exception, about eighteen months later.

Davy Kilpatrick, from Belfast-based Clean Slate TV, contacted me to say that he was making a documentary of Stephen Boyd’s life and career for BBC Television in Northern Ireland.  The 30-minute film was to coincide, more or less, with what would have been Boyd’s 80th birthday.  Davy asked, based on my archive, if I would like to get involved and I said yes in a heartbeat.

The icing on the cake was the mention that veteran actor James Ellis, a friend of Boyd’s, was on board already. The project was called “Stephen Boyd: The Man Who Never Was”.

On 3 July, 2010, I travelled to London to meet Davy and the other crew members, cameraman Mark Garrett and Davy’s son Conor. In addition, I was to meet Jimmy Ellis, a thrill beyond belief, for James Ellis is, of course, a Belfast acting icon (“Z Cars”, “The Billy Plays” and so much more).  From the first handshakes in the hotel lobby, we were all at once at ease, perhaps due to that Irish hospitality thing that just tends to work anywhere in the world.

We filmed that Saturday evening in Leicester Square, outside the Odeon cinema where Stephen Boyd had guarded the door all those years ago. Jimmy, in his pieces to camera, got genuinely emotional at times as he remembered his friend. I was happy to carry a piece of gear and observe the technical expertise of Davy Kilpatrick et al, and to watch Jimmy Ellis in action.

Later, after a Chinese meal in Soho, we all headed back to the hotel bar for a drink and chat.  Jimmy was on fine form with his stories and as the night of the 3 July eased into the early morning minutes of the 4 July, we toasted Stephen Boyd’s birthday.

Eventually, I wrote the book Stephen Boyd: From Belfast To Hollywood and without hesitation, Jimmy offered to write the foreword, which he did. A generous, gracious and gifted man.