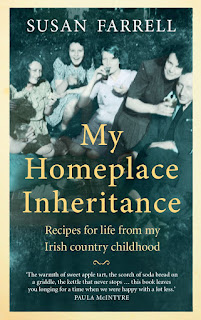 Recipes for life from my Irish country childhood

I am the same vintage as Susan Farrell, so I was delighted to recognise the era in which this marvel of a memoir is set, born in the 1950s, growing up in the 1960s and 70s.  The difference is that she was born and raised in the country (Armagh and Tyrone) and I was more of a city kid from the outskirts of Belfast.

The star of the book is food, what might be recalled as real food, mostly cooked from scratch, and endless lashings of tea.  The kitchen was the most important gathering place, and also the most interesting to young Susan who wanted to learn as much as possible about food preparation, ingredients, cooking and baking. There are recollections of frys, soups, stews, salads, cakes, buns, tarts and much more, with families sitting down together to eat. Potatoes and soda bread, no surprise, feature prominently, and there was no fear of butter or lard. At dinner time particularly there was no choice and everything on the plate had to be eaten, even when ‘the slimy goo’ of detested salad cream made an unwelcome appearance.

The memoir is written with love and warmth and features stories of relatives and neighbours looking out for and after each other.  There is a genuine feeling of a rural community’s generosity, not least in the sharing of surplus foodstuffs.

A clever inclusion is a series of recipes including how to make a proper fry. (It reminded me of the time in recent years when I ordered a fry in a Belfast restaurant and it came with a salad garnish. No such nonsense here. As I said, we’re talking real, proper food.) There is guidance on how to make perfect tea (tea bags begone!).

Other recipes include Christmas cakes, griddled soda farls, coffee and walnut sandwich, gingerbread, beef tea (to cure all ills), Russian fish pie (bejapers, comrade) and so much nostalgia for family food as it used to be.

The story is also a journey from a love of bacon and liver to conversion to full vegetarianism, changing tastes and convictions all wrapped, whatever the ingredients, in a love for cooking and eating. An unashamed foodie.

Susan Farrell has written a book that is homely, in a good way, nostalgic and funny, and it brought back memories of watching (helping/hindering) my own mother in the kitchen making soups and stews, baking apple tarts and currant (curn) squares and so much other delicious food.

And there it is, the word I’ve been looking for. Perfect to sum up this superb book. Delicious.