BOOK REVIEW: FIREFIGHTERS DURING THE TROUBLES BY JOHN WILSON 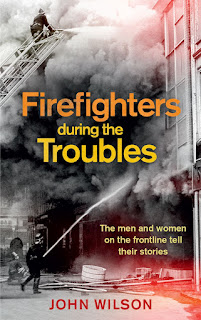 Colin Breen, also a Blackstaff Press writer, wrote two very fine books* about policing in Northern Ireland during the Troubles from the points of view and experiences of individual officers. Now in a similar vein, John Wilson highlights the stories of firefighters in their own words. Books of this nature carry more emotion than staid history chronicles because they are about real people dealing with danger and tragedy, not knowing what they will find when they react to calls for help, sometimes not knowing if they will return to their families at the end of a shift.

The book’s blurb reminds us that there was a time before the Troubles when firefighters would deal with buildings ablaze, of course, but also chimney fires, traffic incidents and smouldering hay sheds. The Troubles brought layers of unimaginable risk to fire teams who witnessed destruction, injury and death at the closest of quarters.

John Wilson, a 30-year veteran, tells of the thrill and excitement of racing to the scenes of incidents but tempers it with the realisation that the aftermath of too many fires affects families forever when their loved ones are victims.

Firefighters in Northern Ireland had heightened awareness of false calls and booby traps.  (I’m sure they still do!) They grew to expect attacks on them and their vehicles, sometimes from organised terrorists and others in what has been described as ‘recreational rioting’.

“Firefighters are just normal people and in the excitement of the moment and all the camaraderie, it’s easy to overlook that reality. The comfort I take from my own experiences and from conversations over the years with colleagues is that we somehow manage not to lose sight of this. We know we are here first and foremost to help people - and we also know what a privilege that is.”

Firefighters During the Troubles is another important Northern Ireland book as told by people who were in the the thick of it. It is not an easy read at times but there is warmth (if you’ll pardon the word) in the way some of these stories are told and I reckon after reading it, it is impossible not to feel greater respect for the men and women of the fire service. They deserve our eternal gratitude. John Wilson has done them proud in this exemplary collection of real and honest memories.