BOOK REVIEW - IS ANYTHING HAPPENING BY ROBIN LUSTIG 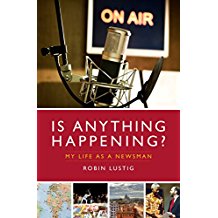 Is Anything Happening?
My Life As A Newsman
by Robin Lustig
Biteback Publishing 2017

There was a time when I devoured news on the radio, on television and in print. I was born in the 1950s and there was a tradition in many households to stop whatever activities were going on to listen to or watch the news. It was deemed to be almost mandatory. News, weather, then tea, or, later, bed. As a commuter in the 1970s and 1980s, reading a newspaper on the train every morning and evening was the done thing. Until quite recently, I used to buy five newspapers on a Saturday and five on a Sunday. I loved reading the reports, the analysis and the columns. I couldn’t get enough of it. Then came the internet and 24/7 rolling bulletins and after a while, I simply got fed up with the news, or rather news presentation. I remember on more than one occasion newsreaders calling the programme a show. Ugh.

I had the good fortune to grow up in an era of proper news people who read the news without ego or histrionics. Okay, some of the television presenters were actors and not really journalists at all but the news was the star, not the face reading the autocue. I have fond memories of Alistair Burnet, Reginald Bosanquet, Andrew Gardner and many more. I was in awe of reporters like Sandy Gall, Peter Sissons, Kate Adie, Martin Bell and others risking their lives in war zones. Now, I can’t bear to watch the news on TV. It’s become showbiz, with occasional exceptions whenever big stories break. But even then, repetition and endless opinionated blether often kill interest in the stories. There are still courageous journalists out in the field, still to be admired and applauded but the desk-jockeys, for me anyway, often dilute reports with inane or superfluous questions and comments. Newspapers too have dropped down my agenda. I buy them now once in a while mainly for favoured columnists.

But, there has always been radio and especially BBC Radio 4. BBC Five Live is far too jokey and chummy for its own good much of the time but Radio 4 stands tall in terms of gravitas, trustworthiness and integrity. Over the years I have enjoyed the brilliant work of John Timpson, Brian Redhead, Robert Robinson, Sue McGregor, William Hardcastle, Gordon Clough, Peter Hobday and so many more (yes, I am aware of the gender imbalance thing!) and to that illustrious list, I add Robin Lustig, an exemplary journalist and broadcaster by any measure, and a voice that graced Radio 4’s The World Tonight and programmes on the BBC World Service with those three things I mentioned earlier – gravitas, trustworthiness, integrity, to which I would add another, humanity. In a calming voice, he delivered the news with authority but also with an understanding of the listeners, especially those of us who tired of the bish-bash-bosh school of journalistic broadcasting and interviewing. (They know who they are!)

And now, Robin Lustig has written a splendid autobiography – Is Anything Happening? My Life As A Newsman – to remind us of the way it used to be. He has been a foreign correspondent with wide experience of some of the world’s worst locations and quite a few of the biggest stories in the modern era – the end of the Berlin Wall, Iraq’s invasion of Kuwait, the horrible bloodshed in Bosnia and Kosovo, the genocide in Rwanda, the return of Hong Kong to China, the death of Princess Diana, the attacks on New York’s twin towers and on and on. From his apprenticeship as a print journalist prior to broadcasting to his 23 years with the BBC, Robin Lustig has been a consummate communicator, a template for modern broadcasters to follow.

The book is a joy to read. It flows beautifully. The narrative is deadly serious when it needs to be but humour is never far away as he recalls the ups and downs, triumphs and disasters, as well as some of the characters in his chosen profession.

There are terrific detailed chapters on the Middle East, The Observer and the BBC.

As I mentioned earlier, in my own classification methodology, I like proper news people. Robin Lustig is a proper newsman of the highest order. I miss him on the radio but I have this treasure of a book that I enjoyed thoroughly and that I will recommend to anyone with an inkling to write or broadcast about current affairs for a living.

‘Throughout my career, I have suspected that someone, somewhere had made a terrible mistake, and that it was not really me who was meant to be having so much fun. So far, no one has owned up to having made that mistake, even though they know perfectly well who they are. I hope that even if they read this book, they will still have the decency to keep quiet.'

Robin Lustig’s CV is evidence of no mistake and as for keeping quiet about his long and distinguished career, no chance!