BOOK REVIEW: BEHIND THE HEADLINES BY ALF MCCREARY

I first posted this in April last year. 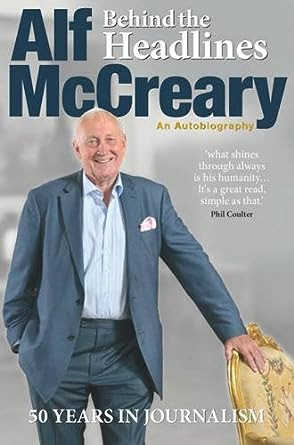 I was born and raised in Belfast. My teenage years, circa 1965 to 1973, coincided with the beginnings of "the Troubles".  In the early 70s, I was a Trainee Manager in British Home Stores in the city centre and, like many people, I had to navigate security gates, long queues, body and bag searches to get to work.  We endured bomb scares and, every now and then, the shuddering reality of nerve and glass shattering explosions.  It was an awful time and things got even worse in the years after I left to pursue my work ambitions.

But in my "Belfast years", I was an avid reader of local newspapers.  We were an Irish News family and I would catch up with that publication in the evenings at home.  But I loved the Belfast Telegraph, read on the bus home, because of it's news coverage and especially for the input of the wonderful cartoonist Rowel Friers and the wit and wisdom of writers Billy Simpson, John Pepper and Alf McCreary, amongst others.  Alf McCreary was different from the rest because, as I saw it, he was always perceptive and razor-sharp when it came to analysing the human condition in all its good, bad and ugly forms.

So, I was delighted to see that Mr McCreary had written a book about his life, work and times.  On a recent visit to Belfast, I bought a copy and over the past couple of weeks I have enjoyed travelling through his life.

I remembered his honesty, reporting the facts, and his clear understanding of the complications, frustrations and emotions inherent in Northern Ireland's history.  He did not shirk his responsibility to tell the truth regardless of boundaries, tribal, religious, political or otherwise.

I remember reading his book Survivors in the mid-70s, stories of innocent victims of the violence and mayhem in Northern Ireland, and it shook me because it was shocking, harrowing, emotional and real - as it was meant to be.  This book stands, in my opinion, as one of the best pieces of evidence that war is good for nothing and always bad for people who just want to get on with their normal lives.

I learned quite a bit about Alf McCreary's life.  Apart from his successful and award-winning journalistic career in Northern Ireland, notably in and around the Belfast Telegraph, I had been unaware of his extensive travels to some of the world's other trouble spots on behalf of Christian Aid, his tenure as head of information at Queen's University and just how many books he had amassed as writer, co-writer and contributor.

There are so many things to quote from the book but I was struck by this extract from a speech he made in 1976 - that's 1976 - nearly 40 years ago, and as I read it again and again, I wonder, taking into consideration constant political bickering about relative trivia, if much has changed:


"We have a short fuse and a long memory, we look forward, not back, to 1690 and 1916. We lack vision, we lack compassion, we lack statesmen, we lack politicians. We even lack ideas.

I look forward to a society where I can walk without fear in Royal Avenue, or East Belfast or the Bogside. I want a society where we will have politics and not a sectarian pantomime, where tomorrow is more important than today.

I am so pleased that Alf McCreary wrote his autobiography.  His writing was part of my education as I road the number 13 bus home.  His wisdom and humanity shine through this excellent book.