TALES FROM AN ACTOR'S LIFE BY STEVEN BERKOFF 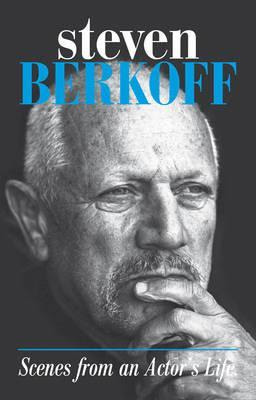 
I have read many autobiographies and biographies about actors and acting but I have not read one quite as quirky and entertaining as Tales From An Actor's Life by Steven Berkoff.

Here's the blurb from the cover:


Long considered the enfant terrible of the British theatre both as actor, director, and writer and famous for his villainous roles in films such as A Clockwork Orange, Rambo and Octopussy, Steven Berkoff is original in everything he does. He is a man of whom one should never expect the expected. Now, in this captivating book, he shares scenes from his own colourful theatrical life, thinly disguising them on occasion to protect the guilty but never being less than entertaining and forthright in his accounts. And what a delight they are, for as Berkoff says in his introduction, acting must be one of the strangest professions since the rules are flexible and few can agree even on the simplest of them. Berkoff has seen it all and he takes us here on an informal tour recalling among other things his first job (as an assistant stage manager and small part player ), and the first line he ever uttered on stage (Going Bowling tonight Sammy?), his early touring dates and disasters (and even romances) in rep, a traumatic audition for a revered Peter Hall which ended in tears, visiting Kirk Douglas at his home in LA, triumphantly directing the classic On The Waterfront on the London stage, and (less triumphantly) playing Hamlet the Berkoff way. Romantic though an actor's life may seem to be to the general public, clearly it is often tough and often laced with tears. But there is laughter too, and camaraderie and in these Tales, Berkoff gives the reader a real insight and feeling of what it is like to tread the boards, and the passion, work, and intuition that goes into creating a role.

And here is a link to Berkoff's screen CV (for information):

The book is written in a boisterous, flamboyant style, moving with ease from calm explanations of the actor's existence to full-on rants about the frustrations of being a strolling player determined to be as independent as possible in his choices of work.

Most of the book is written in the third person.  Berkoff is "he" and "the actor" and it works well as he tries to hover over his life and career more as an observer rather than as an ego-driven narrator.

Interestingly, knowing the life he has lead, he barely mentions by name any of the famous people he has worked with, loved, liked and despised.  The book is more about feelings, emotions, frustrations, failures, successes, challenges and struggles rather than a buffet of celebrity guest mentions. And it is all the better for it, I think.

The only indulgence in this regard - he allows himself an account of his meeting with Kirk Douglas in Los Angeles and for a chapter he is Steven Berkoff.

If you want an account of what it feels like to be in such a fickle career, I recommend Tales From An Actor's Life for its honesty, its theatricality, bumptiousness and breathless writing style.

It's great fun too!