KELLY: A MEMOIR by GERRY KELLY with DON ANDERSON 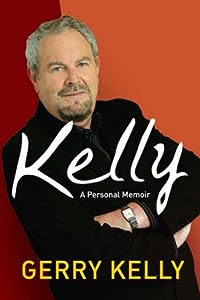 I had the pleasure and privilege of being interviewed by Gerry Kelly a couple of years ago when I was in Belfast to give a talk at the Belfast Book Festival.  On that occasion he was covering for BBC Radio Ulster's Alan Simpson on the afternoon show.

I was nervous but after a handshake and a brief chat while a record played (Kim Carnes - Bette Davis Eyes), I felt much calmer and the 10-minute interview went well, according to friends and family who had tuned in.

I had known about Gerry Kelly for years via radio and TV shows and it was a great opportunity to meet him and get a little taste of his calm, conversational style of broadcasting.

He is best known for his long-running chat and entertainment show "Kelly" that ran live on prime time Ulster Television from September 1989 to December 2005 - (recipe - "topicality, music, audience participation and celebrity") - a show that attracted huge, loyal audiences and boasted a guest list to die for in nearly 600 shows.

The book gives some background on Gerry and his family (a narrative about his father leaving the family home chilled me because much the same thing happened with mine) and soon embarks on a CV journey include school teaching, journalism, television reporting and presenting.

But it's the "Kelly" show that dominates. It took up a huge chunk of his life and he was devastated when it ended.  Sadly, for career reasons, I was working in England during these prime years and missed a lot of great television but I caught some of the shows during visits home.

Kelly: A Memoir filled in a lot of details about the trials, tribulations, joys and delights of live TV. You'll get a flavour of the man and his work from this link I found - http://www.thekellyshow.com/profile1.html - but if you can get hold of a copy of the book, so much the better.

It is informative and entertaining, sometimes opinionated but always sincere and honest.

Gerry Kelly is an outstanding broadcaster with a professional and personal style that should be a template for some of the upstarts who think they can just wing it on TV and radio.  He is a gifted man with a great story and he tells it very well indeed.

I'm glad I got to shake his hand and answer his questions.

For the uninitiated, Gerry can be heard currently on Fridays and Saturdays on BBC Radio Ulster doing what he obviously enjoys - playing great music, chatting to great guests and championing Northern Irish talent.